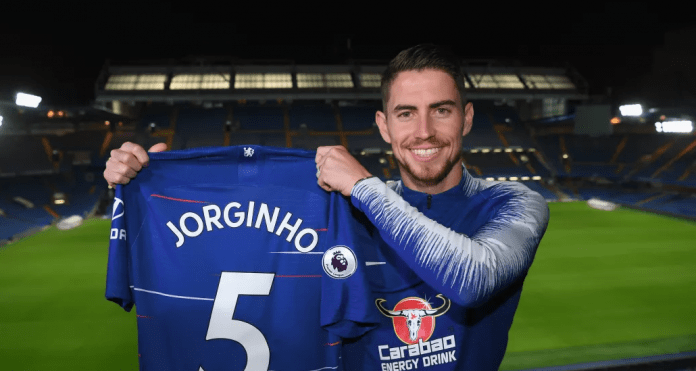 Chelsea midfielder Jorginho was linked with a move to Arsenal earlier this summer and it seems that there was some truth in those rumours.

The Chelsea ace has now hinted that there were some talks and he was open to negotiations with the North London giants.

Jorginho ended up staying at Chelsea and he has no regrets about that. The midfielder explained that he is completely committed to the Blues and he is looking to help the club do well this season.

“I believe that every player is open to negotiations,” Jorginho told ESPN Brazil.

“So I believe there was something they talked about. And in the end, it was decided that I remain here. Now my head is here and we’re going to do a great job with Chelsea, which I always wanted to do.”

The former Napoli midfielder arrived at Chelsea along with Maurizio Sarri and he has done reasonably well for the Blues so far. However, he is certainly not irreplaceable at the club.

If a club comes in with a good offer, it might be possible that Chelsea consider a sale. It will be interesting to see what happens at the end of this season.

It is no secret that Arsenal needed to improve their midfield options at the start of the season and therefore their interest in Jorginho makes sense.

Arsenal ended up signing Thomas Partey from Atletico Madrid in the end and the 27-year-old was quite impressive on his full debut for the Gunners during the midweek.

Partey is probably more suited to Arteta’s style of play as compared to Jorginho. The two players are completely different in their style and skill set but Arsenal needed someone like Partey more than they needed a regista like Jorginho.

The likes of Ceballos can take up the playmaking duties but the Gunners needed a physically imposing technical player in the middle. Partey will help break up the play and get the ball out of tight situations and start counters.

The former Atletico star is agile and press-resistant. He should be able to improve Arsenal defensively as well as in the attack.