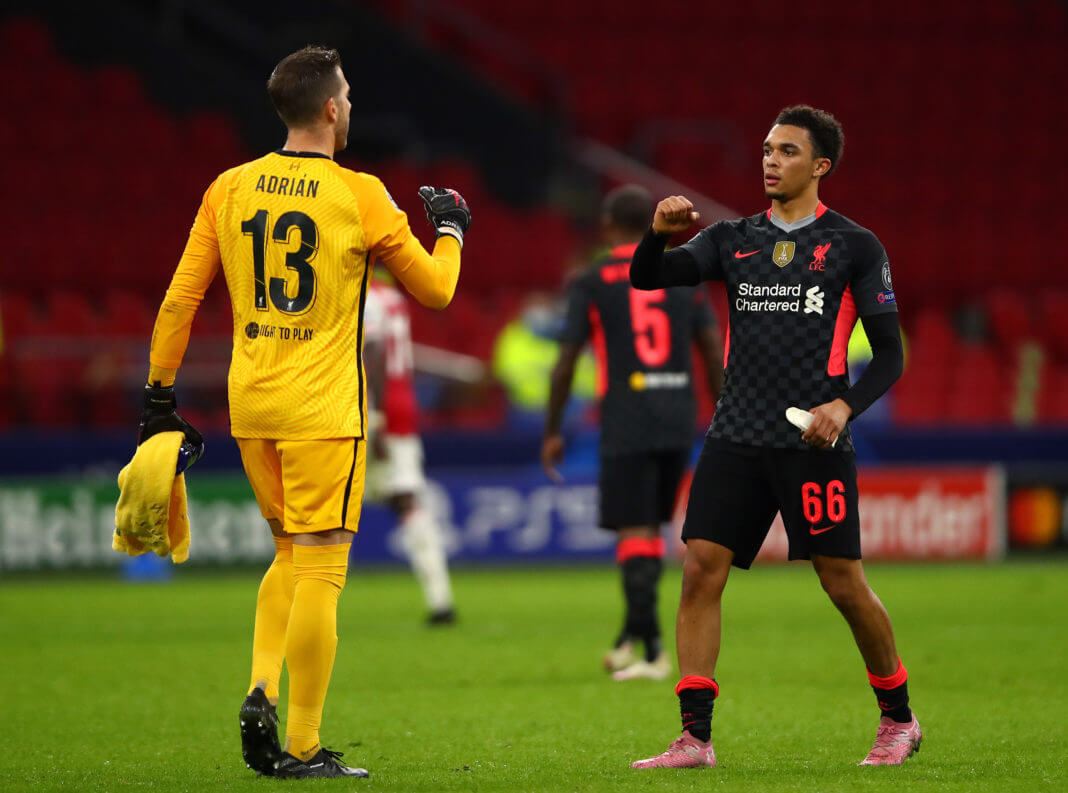 Premier League champions Liverpool get off to a winning start against Ajax in the Champions League group stage opening game on Wednesday night.

Jurgen Klopp’s side were left to bare bones in defence following the loss of talisman Virgil van Dijk and Joel Matip, but they did enough to leave Amsterdam with a clean sheet.

Ajax did test Liverpool, and there were nervy moments at the back too.

Adrian nearly made a big blunder with a goal kick with the shot being blocked by Dusan Tadic in the box. Fabinho produced a smart tackle to block Tadic, and later produced an acrobatic clearance to Tadic’s lob off the line.

And Ajax looked to exploit any weakness out of possession by dropping deep, encouraging Liverpool’s defence to have the ball and forcing them to use Adrian as a passback option.

Tagliafico almost escaped from Gomez before Adrian pushed him wide in the box. Davy Klaassen’s powerful effort bounced off the inside of the post, while Quincy Promes was involved in a brilliant attacking move.

However, it was Tagliafico who sliced Sadio Mane’s cross into his own net with 10 minutes of the first half remaining, and it made all the difference between the two sides.

Liverpool created a few really good chances in the second half, with the likes of Diogo Jota, Takumi Minamino and Xherdan Shaqiri looking lively.

Jurgen Klopp will be particularly pleased with the performance of Jota and Minamino, both showing glimpses of quality and they had chances to score late-on.

Here’s how some Liverpool players reacted on Twitter after the game.

We fought together to get the first 3️⃣ points and a clean sheet 💪🏻🔴 pic.twitter.com/YJnPBbXCnS

European nights are back 💫 pic.twitter.com/jOH8DItA5m

Tough match tonight. We had to fight for it, but a win on the road is a great way to start the group stage 💪🏾🔴 #AJALIV #UCL pic.twitter.com/tNbA7j45zf

Liverpool, who also face Atalanta and Midtjylland in Group D, will face Sheffield United next in the Premier League on Saturday at Anfield.